Georgia to reopen some businesses as early as Friday 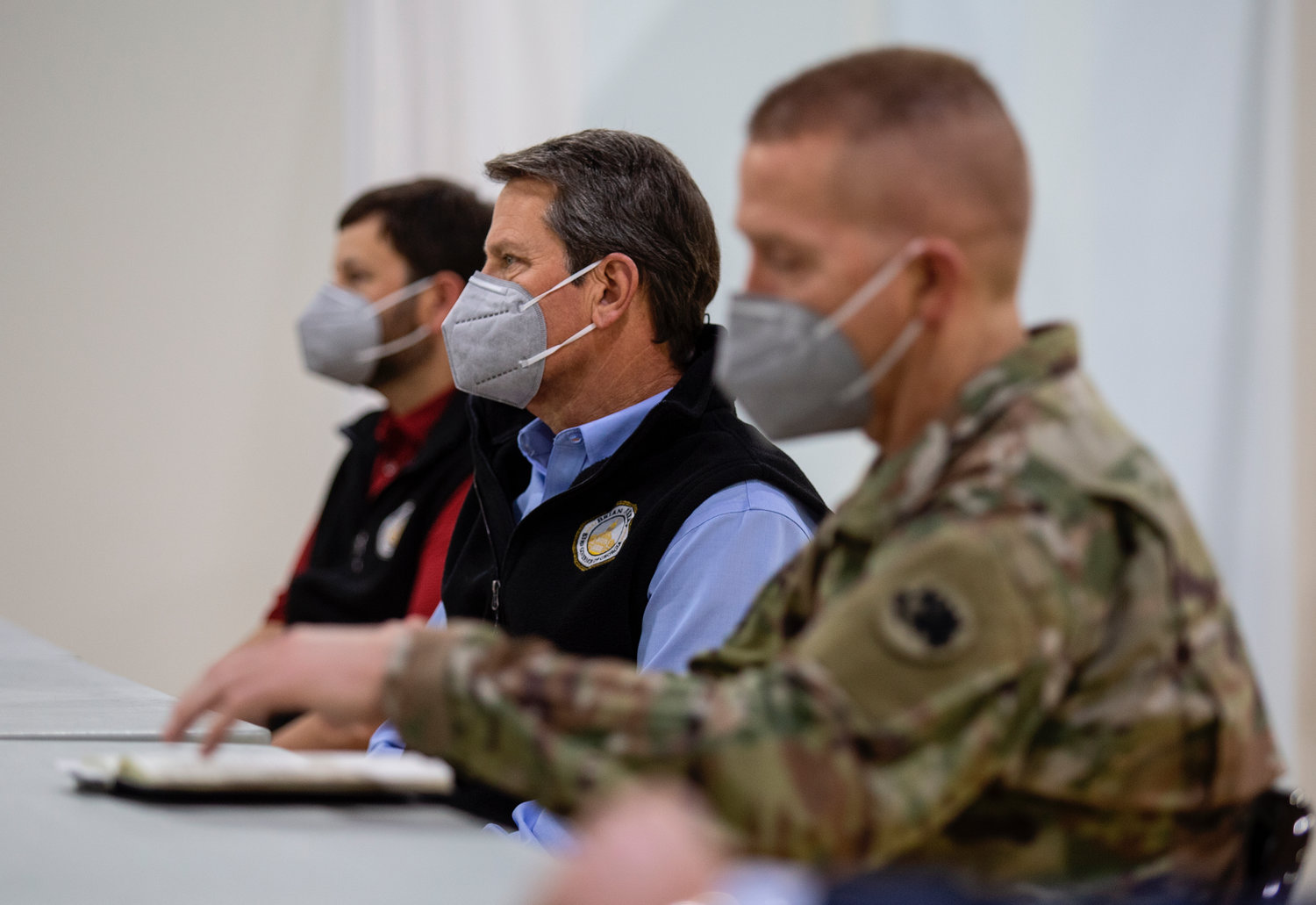 Georgia Gov. Brian Kemp listens to a speaker during a tour of a massive temporary hospital at the Georgia World Congress Center on Thursday in Atlanta.
RON HARRIS/AP
Posted Monday, April 20, 2020 9:25 pm
STAFF REPORT
Bartow County’s recorded cases of coronavirus rose to 255 and deaths were at 24 as of 7 p.m. Monday, while Georgia is approaching 20,000 cases with 3,703 hospitalizations and 775 deaths.
Those numbers were released by the Georgia Department of Public Health a few hours after Governor Brian Kemp announced plans to restart the state's economy before the end of the week, saying many businesses that closed to mitigate the spread of the coronavirus could reopen as early as Friday.
Georgia's timetable would allow gyms, hair salons, bowling alleys and tattoo parlors to reopen as long as owners follow strict social-distancing and hygiene requirements. By Monday, movie theaters may resume selling tickets, and restaurants limited to takeout orders could return to limited dine-in service.
Such a swift reopening runs counter to the advice of Dr. Anthony Fauci, the government’s top authority on infectious diseases, who warned again Monday that resuming business too soon risked a fresh spike in infections.
However, Kemp said it was important to allow businesses that had been shut down a chance to get some revenue flowing.
“I think this is the right approach at the right time,” Kemp said. “We’re not just throwing the keys back to these business owners. We’re talking about people the government shut down their business.”
Bars, nightclubs and live performance venues will remain closed.
Kemp’s action comes a month after he closed many businesses and not quite three weeks after he issued a shelter-at-home order that will remain in place until April 30. Kemp said elderly and medically fragile people should continue to stay at home until May 13.
The governor said a decline in emergency room visits by people with flu-like symptoms indicates that infections are coming down.
“The bottom line is, social distancing worked,” state Public Health Commissioner Kathleen Toomey told a handful of reporters after Kemp's news conference.
Kemp acknowledged Georgia has lagged when it comes to COVID-19 testing and announced new initiatives to ramp it up. He said the state medical college in Augusta will begin producing thousands of swabs each day for collecting test samples. The school will also offer an online app statewide that would let people with symptoms consult with a clinician and be referred for testing if warranted.
Meanwhile, the Georgia National Guard will begin deploying teams to nursing homes and other long-term care facilities with equipment for administering 1,500 tests per day.
“Testing defines the battlefield and informs our long-term strategy,” Kemp said. “These efforts significantly increase our capacity as we take measured steps forward.”
Think tank does the math on coronavirus-driven state budget shortfall
The economic impacts of coronavirus could put the state government $3 billion to $4 billion in the hole during the next fiscal year, an Atlanta-based public policy think tank warned Monday.
Closing such a huge budget shortfall without massive cuts to state agencies and vital services is going to require massive federal assistance, more aggressive than the economic stimulus package Congress passed late last month, said Danny Kanso, a policy analyst for the Georgia Budget and Policy Institute (GBPI).
“If the federal government does not come up with a serious response … it could really have very dangerous effects for the economy and the government of our state,” he said.
In an eight-page analysis released Monday, the GBPI predicted that a sustained unemployment rate of 10% to 20% in Georgia – a good possibility considering that 18% of the state’s workforce has filed unemployment claims in recent weeks – would send state income tax revenues for fiscal 2021, plummeting more than $3 billion below expectations. The new fiscal year starts July 1.
The report projects state sales tax collections to fall $300 million to $670 million, depending on how long businesses are closed to maintain social distancing.
Georgia is to receive about $3.5 billion of the $150 billion Congress earmarked for state and local governments from last month’s stimulus package.
But Kanso noted that money is going primarily to help offset the costs of the state’s response to COVID-19, not to address the looming budget shortfall.
Making up the shortfall by furloughing state workers and making deep cuts to critical state services including education, health care and public safety would only prolong and intensify the economic downturn, he said.
“We can’t cut our way out of this crisis or borrow our way out of this crisis,” Kanso said.
Instead, the GBPI report recommends addressing the shortfall by increasing revenues. A way to do that would be by increasing Georgia’s tobacco tax, currently one of the lowest in the country.
Kanso said raising the tax from 37 cents per pack of cigarettes to the national average of $1.81 would generate $575 million a year.
The report also suggests a deep dive into the generous tax incentives the state doles out every year to generate new jobs and keep businesses already in Georgia from leaving.
Even the state’s most popular – and costly – tax incentive, the film industry tax credit, could be reduced by raiding $2 billion in unused credits an audit turned up in March of last year.
The General Assembly already has passed and Gov. Brian Kemp has signed the fiscal 2020 mid-year budget, which covers state spending through June 30. The GBPI report projects the state will end the current fiscal year with a $1 billion shortfall.
Lawmakers will have to deal with the lion’s share of the projected shortfall when they reconvene the 2020 legislative session to take up the fiscal 2021 budget. The session was suspended indefinitely March 13 as the coronavirus outbreak took hold in Georgia.
— The Associated Press and Capitol Beat News contributed to this report.
E-Edition